With his story in Dominion: An Anthology of Speculative Fiction from Africa and the African Diaspora, Oghenechovwe Donald Ekpeki becomes the first Africa-based writer to be shortlisted. “It’s something you never realised that it’s possible,” he said. 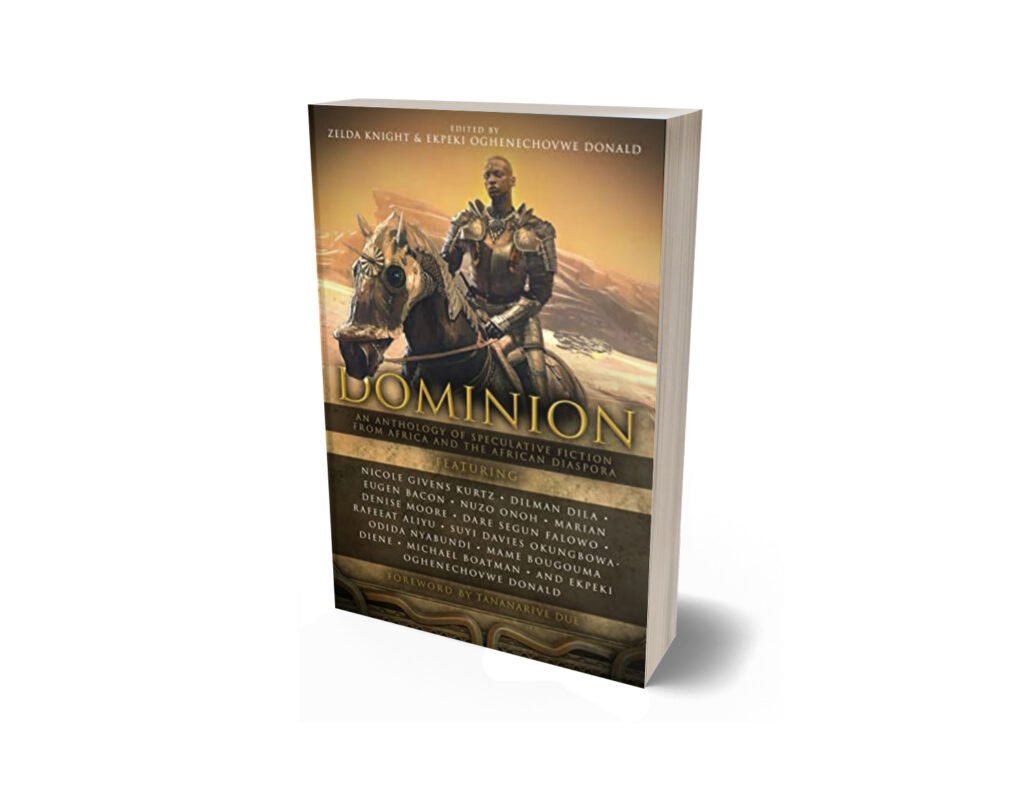 Dominion: An Anthology of Speculative Fiction from Africa and the African Diaspora.

In February, we reported that six Africans made the British Science Fiction Association (BSFA) Awards shortlist, the first time that so many had been recognized. One of them, Oghenechovwe Donald Ekpeki, has now been shortlisted for the Nebula Awards in the novella category, for his work Ife-Iyoku the Tale of Imadeyunuagbon, which also got him on the BSFA awards shortlist. Remarkably, the novella was published in Dominion: An Anthology of Speculative Fiction from Africa and the African Diaspora, a book he co-edited with Zelda Knight. Dominion was released through Knight’s press Aurelia Leo.

Awarded since 1966, the Nebula Awards recognise the best works of science and fantasy fiction published in the United States.

Ekpeki is the first African writer living in the continent to be shortlisted. While Dominion is not a finalist in any category, it is the first anthology edited by a Black writer to have a story on a Nebula shortlist.

The three are the first African writers to make the Nebula Awards shortlists since Nnedi Okorafor, who won the novella category in 2016 for Binti and was shortlisted for the novel category in 2011 for Who Fears Death. (Tomi Adeyemi’s Children of Blood and Bone won the Andre Norton Award in 2019—a year before it became a Nebula Award.)

The announcement was made by the Science Fiction and Fantasy Writers of America (SFWA) on 15 March 2021, in a livestream event hosted by its president Mary Robinette Kowal.

“Stories are how humanity make sense of reality,” Mary Robinette Kowal said. “We are living through history and our words are how we share what we have learned with those who will come after us. All of these finalists helped us reimagine new realities in 2020.”

Ekpeki’s Ife-Iyoku the Tale of Imadeyunuagbon is an Afrofuturist tale. There’s a Third World War, a “nuclear showdown” that kills almost everything on the African continent. The Africans who survive return to Ife-Iyoku, a reimagined version of pre-colonial Ile-Ife, the spiritual home of the Yoruba in Nigeria. Ife-Iyoku, like Olumo in Abeokuta, becomes a place of protection and refuge for them.

Tochi Onyebuchi’s Riot Baby, published by Tor, a Macmillan imprint, is “[A]n intimate family story as [well as] a global dystopian narrative.” It is about a girl named Ella, who has “a Thing.” The “Thing”: Ella sees the future, the disaster that awaits those around her. Ken, her brother, tries to protect her from this “Thing,” but then he is incarcerated.

Riot Baby won the 2020 New England Book Award for Fiction and the 2021 ALA Alex Award!, and is a finalist of the NAACP Image Award for Best Outstanding Work of Literary Fiction.

Jordan Ifueko’s Raybearer, published by Amulet Books, is the story of Tarsai, a young girl whose heart’s desire has always been to find a home. Raised by The Lady, who is never really there, she is sent to the capital city of Aritsar, where she is to compete to be selected as one of the Crown Prince’s Council of 11. However, The Lady as a hidden, bitter agenda: She wants Tarsai to kill the Crown Prince.

Amulet Books describes it as a “story of loyalty, fate, and the lengths we’re willing to go for the ones we love.” It is the first in a series.

Being a finalist for a Nebula Award is “unbelievable,” Oghenechovwe Donald Ekpeki told OPEN COUNTRY MAG. “It just hits you. You forget about it. You don’t think that it happened. Then you get reminded every time and it shocks you. It’s something you never realised that it’s possible for you to have.”

At the live event, the actor and audiobook narrator Cary Hite read an excerpt from Ekpeki’s story.

The first draft of Ife-Iyoku the Tale of Imadeyunuagbon took a month to write. When Ekpeki finished the story in 2019, he sent it out.

“I sent it to literally everybody that publishes novellas, everybody that was open at the time,” he said. They all rejected it, but a lot of the rejections came with editorial suggestions. “I took all the suggestions and I reworked it.”

Last year, Ekpeki put the story in the Dominion anthology.

The story is inspired by Nigeria and the Nigerian situation. “There’s a group of people who are living in a fallen world—obviously that’s Nigeria,” Ekpeki said. “Then they develop powers to survive. We have learned our environment, our society pushes us to just survive, and it is extraordinary, our survival.”

Ekpeki had to default his National Youth Service (NYSC) last year to work on the anthology. “I did not serve. I put my PTA in a non-existent place,” he said. “I wasn’t going to work. I stayed in my house and I was writing and editing Dominion. That was the tradeoff.”

For a while, Ekpeki worked at a media company where he wrote five articles per day for N30,000 a month. One of the articles he wrote then was about Nnedi Okorafor making the Nebula shortlist.

Check the full 2021 Nebula Awards shortlists here. The winners will be announced at the awards ceremony, during an online conference scheduled for June 4-6.