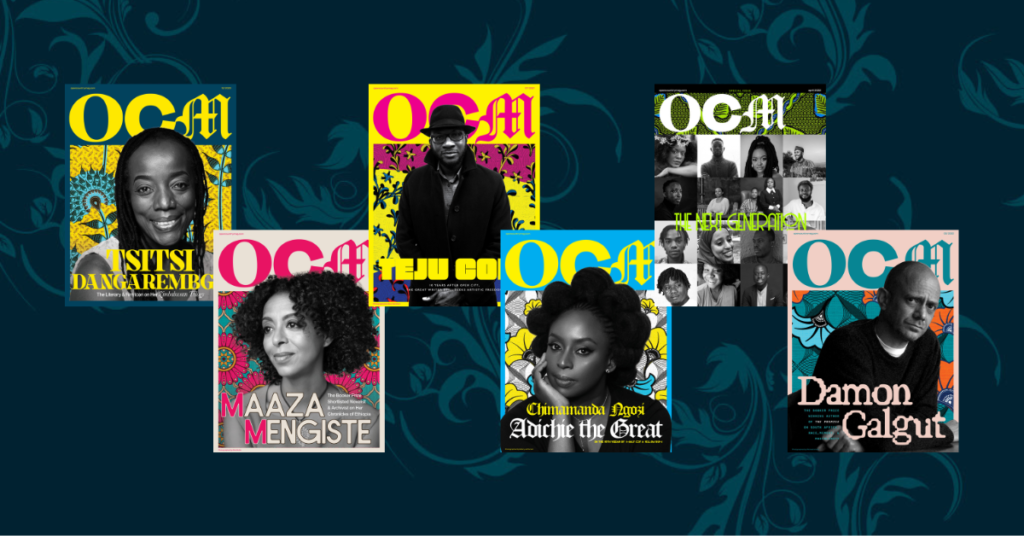 From culture icon Chimamanda Ngozi Adichie to transformational artists Teju Cole and Damon Galgut, to groundbreaking advocates Tsitsi Dangarembga and Maaza Mengiste, to the next generation of voices, Open Country Mag swiftly established itself, in little over a year, as a scene of revelation: the most important platform for Africa’s most important writers. And now, with our expansion into Nigerian film and TV, our mission deepens: we are contextualizing Africa in the global conversation, telling essential, in-depth stories of ideas that shape the continental literary and film cultures, and creating opportunities by linking, for the first time, two influential industries. Our vision, guided by values of integrity and communal support, is to attain that media benchmark that has so far been exclusive to Western organisations: become a truly multiplatform space for cultural storytelling.

Open Country Mag was founded by Otosirieze, in reaction to industry backlash, in African literature, against young writers who criticize rape culture. It takes its name from the new generation of writers, especially in Nigeria, who are pushing back against censorship and leveraging social media and a newfound confidence to speak up and make the world they want to see. This generation is saying: This country is now open to freedom. The website launched on December 26, 2020.

Our international readership comes to us for our longform Profiles; features; book, film, and TV reviews; interviews; new writing; and news on the people and institutions shaping the scenes. Our layered cultural journalism is driven by our need to make the deep archives of resources, data, and history available for use anywhere, from general reading to academia; and, crucially, to be a ladder for the next generation of African creatives in literature and film, to help provide necessary tools in their development.

On April 8, 2022, we announced The Next Generation, our two-part debut special issue. Curated by our editor, it profiles 16 writers and curators who have influenced African literary culture in the last five years.

Our expansion into film and TV is partly inspired by our recognition that a sustainable literary model for the 21st century must be in communion with other creative industries. It allows us to explore options to realize our potential, which is why we launched our OCM Bookshop, where we market books for commission, and the fancily-named OCM Streaming, where we showcase films, shows, music, and podcasts. Both are being further developed.

Essential content, beautiful production. Readers can get inside the literature, and industry insiders can discover new talent.

Our work has been praised in public by Chimamanda Ngozi Adichie and by Booker Prize winner Bernardine Evaristo, and our unparalleled industry reach is underscored by this paragraph in our founder’s announcement of our expansion into film and TV:

I knew that our work in African literature had reached the tipping point when, months ago, the great Wole Soyinka replied in an email to say, among other things: “I am well acquainted with your magazine, frequently receive links to its contents. Always a stimulating read.”

As a multiplatform space for cultural storytelling, we are testing and adapting, treading in uncharted territory. While we have a defined direction, our ears are on the ground, listening to our readers, to know what they want, the stories they want to tell and want to see us tell. You, dear reader, can contribute to this vision, you can help us achieve it, by making a PayPal donation.