Panels, Performances, and a Million-Naira Slam: At the Lagos Poetry Festival 2021

A recap, with photos, of the four-day Lagos International Poetry Festival 2021, staging a comeback post-pandemic lockdown. 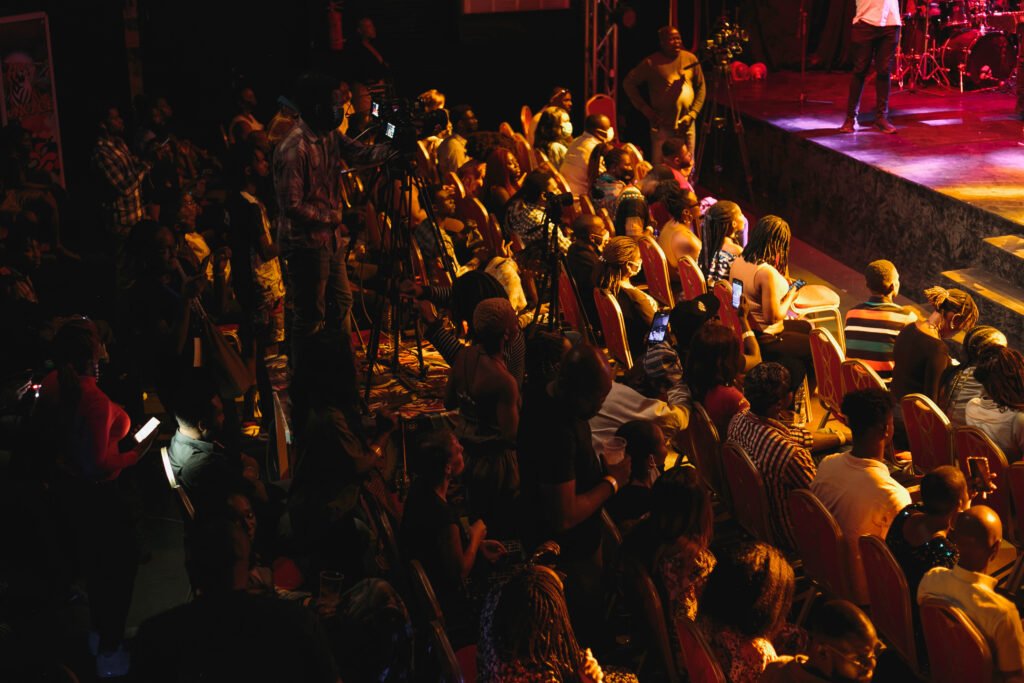 Home
Books
Panels, Performances, and a Million-Naira Slam: At the Lagos Poetry Festival 2021

The seventh edition of the Lagos International Poetry Festival ran from October 21 – 24, 2021. It was four days of thought-provoking conversations, performances, and banter that drew audiences in a city hungry to get back into the groove. Stirring from the pandemic, the global influence of Lagos’ frenetic cultural scene is at an all-time high.

LIPFest—like most festivals forced into hibernation in 2020 or compelled to adapt wholly online—returned this year with some of its physical elements, including two well-attended performance events, at the African Artists’ Foundation, and a documentary screening, at Terra Kulture. The festival, themed “Ancestral Imaginings,” hosted eight events in total, with 20 guest writers, poets, and public intellectuals from across Nigeria, Ghana, the U.S., Kenya, and South Africa.

Activities kicked off early afternoon on Friday, with a virtual writing workshop facilitated by the American poet and activist Aja Monet.

It was followed by a conversation featuring the human rights lawyer and activist Ayo Sogunro; the political pundit Demola Olanrewaju; and Ayisha Osori, author of the bestselling political memoir Love Does Not Win Elections. It was moderated by the broadcast journalist, writer, and editor Buchi Onyegbule. Their panel, themed “Danfo For Sale: Party Politics as a Vehicle for Change,” explored the systemic disenfranchisement of young progressives in Nigeria’s ideology-free and historically corrupt partisan politics. The arguments straddled opposing points: engage the existing system from within, or organize and pull it all down and rebuild.

The next panel was equally charged. It had the award-winning journalist Mercy Abang,  the lawyer and activist Dele Farotimi, and the tri-sectorial leader Abosede Geroge-Ogan discuss the role of civil society in salvaging Nigeria from the wreckage of political leadership. They tracked how Nigeria’s democratic space, in spite of its many challenges, is the fruit of hard-won battles by activists at the risk of jail time, exile, and death; how their work delivered a democracy inherited by a new generation of technocrats determined to expand civic and political spaces by leveraging technology and also willing to challenge the old order without compromise. It was, they agreed, the same old struggles, but with new tools.

LIPFest has always been a continental platform showcasing emerging and established storytellers, poets, and musicians. This year, the festival launched its inaugural poetry slam for young poets and spoken word artists between the ages of 18 and 35. The #LIPFest21 Poetry Slam was meant to encourage and reward the new wave of storytellers, poets, and spoken word artists. For many, the N1 million contest was the festival highlight.

The showcase happened at the African Artists’ Foundation. The event was slated for 4 p.m. but the venue teemed with people an hour earlier. There were music, drinks, and that quintessential Lagos offering: small chops.

Ten contestants, shortlisted from a flood of entries, battled it out under a cloudless sky, in front of an excited audience. As they bent language and subverted form, the dazzled audience cheered and hooted all the way.

The judges included the poet, filmmaker, and pioneering spoken word artist Sage Hasson; the Ghanaian folklorist and poet Nana Asaase; and Lydia Idakula, whose open mic venue, Taruwa, was an early platform for many of Lagos’ beloved poets and musicians.

After two keenly contested rounds, the contestants were whittled down to five: Loveth Liberty, Fragile Dogubo, Mariam Oziohu Abdulsalam, Wayne Samuel, and Toby Abiodun. The third round was a two-horse race, with Fragile Dogubo and Toby Abiodun splitting the audience’s affection. Then Abiodun was declared winner. Hours later, he tweeted: “Took my depression to a poetry slam and won it.”

Saturday began with the screening of a documentary, Odia Ofeimun: A Literary Life, at Terra Kulture.

Directed by Hasson, it traces the universe of stories and texts that captured the mind of a young boy from rural Nigeria, shaping him into one of the most enigmatic figures in African cultural history. It is the first in a series covering the lives of some of the continent’s pioneering storytellers.

There were readings by members of the audience from Ofeimun’s vast body of work.

Terra Kulture was also the venue for the festival’s command performance event, an evening of words and fireworks headlined by the writer, poet, actor, and musician Saul Williams.

For three hours, a full hall of people meditated, danced to, shouted, and absorbed carefully curated words and music—from the poet and playwright Dike Chukwumerije to the Ghanaian sensation Nana Asaase, from AlhanIslam of Kaduna to Lardo Adekunbi of Jos, among others.

Adding color to the evening were the musicians Femi Leye, Johnny Drille, and Eutk Ubong.

“The Future of African Stories”

On Sunday, the closing day of the festival, there was a virtual conversation themed “The Future of African Stories.” It explored the sustainability of publishing, ownership, and distribution of African stories. Moderated by the Nigerian writer Richard Ali, it featured Moky Makura, Executive Director of Africa No Filter; Troy Onyango, a Kenyan writer and the editor of Lolwe magazine; Elizabeth Johnson, co-founder of Pa Gya Literary Festival in Accra; and the linguist, poet, and writer Kola Tubosun.

We must “consume our own content, invest in our own platforms and right size the funding,” Mokura advocated.

Bringing the festival to a close was a passionate keynote lecture by Dr. Akintoye Akindele, an investor, businessman, and public intellectual. Titled “The Ghost of Sankara: Reframing Leadership and Society in Africa Around an Ethical Core,” it charged the audience to reclaim Africa’s dignity from distorted histories, asking us to harness the coalescing forces of demography and technology to shape a new direction for the continent, one guided by the timeless moral codes of our forebears.

The eighth edition of the Lagos International Poetry Festival will run from October 27 – 31, 2022. It is themed “Babel.”

Creative Africa is the organizer of the Bada Murya Fellowship and of the Lagos International Poetry Festival.