Collins Okoh, co-writer of the ₦636 million box office juggernaut starring Funke Akindele, tells us about his research of ghetto culture and the need for creative freedom for screenwriters. “I never thought that a gun would be referred to as ‘English’ until I started writing the movie,” he said. 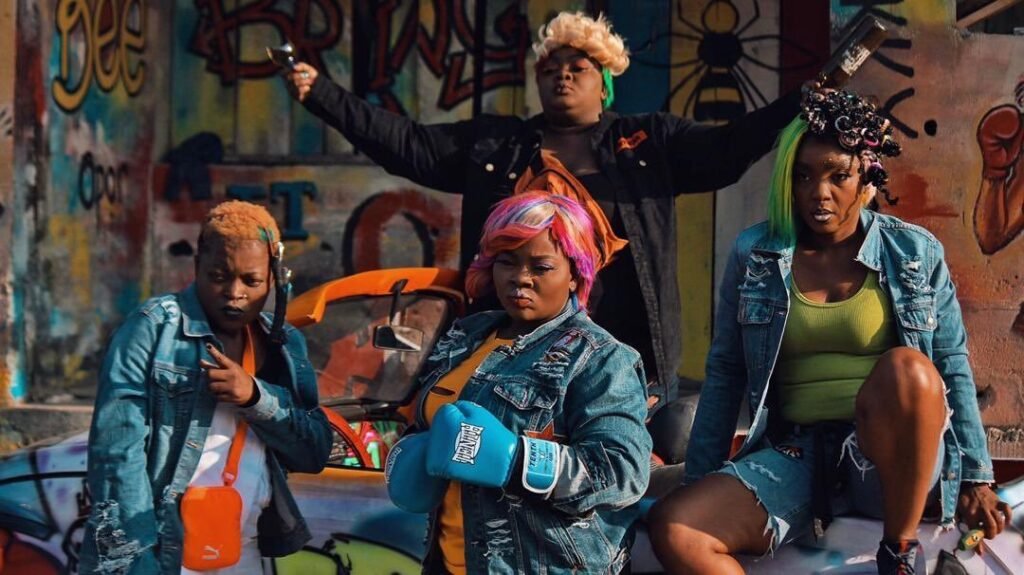 Omo Ghetto: The Saga starred, among others, Funke Akindele and Chioma Chukwuka.

One year after its release in 2020, the crime comedy Omo Ghetto: The Saga became the highest-grossing Nigerian film of all time, its then-₦468 million overtaking 2016’s The Wedding Party. The gangster action flick’s total now stands at ₦636.1 million. A sequel to the 2010 film Omo Ghetto, it stars Funke Akindele, who plays the double lead role as two twin sisters, alongside Deyemi Okanlawon, Eniola Badmus, Chioma Akpotha, Blossom Chukwujekwu, and Zubby Michael. Akindele, who co-directed the film with JJC Skillz, was also part of the writing team that included Collins Okoh and Yinka Adebayo.

Okoh is a screenwriter at SceneOne Productions, owned by Akindele. He has worked on scripts for the TV series My Siblings and I and Jenifa’s Diary. He talks to Open Country Mag about the writing process for Omo Ghetto: The Saga and his career as a scriptwriter.

How did you come to be involved in Omo Ghetto: The Saga?

It was an original concept of Funke Akindele-Bello. She had done a very successful crime comedy-drama in 2010 and wanted to make a worthy sequel. When she reached out to me to be part of the writing team, it was with infectious enthusiasm, and when I read the plot, I was excited. It’s a project very dear to my heart and I feel so honoured to be part of it.

What was your research process for the script?

Because most of the movie is set in a ghetto, it was necessary that we get accustomed to the culture if we were to make it as realistic as possible. This meant a lot of research, and bringing in people to help with the appropriate language and mannerisms that we were trying to portray. It was an interesting learning curve for me because I got to relate with people who live in this culture and see the world from their eyes. I also got to know that, in the ghetto, slangs are just slangs. They do not have to have a correlation with the actual thing described. For example, I never thought in my life that a gun would be referred to as ‘English’ until I started writing the movie. There are several unusual slangs like that, and they all amuse me.

Omo Ghetto has riveting combat scenes. Did your script influence the cinematography of these scenes?

Yes. We had a picture in our head. We had something we wanted to achieve so we painstakingly wrote the script, carefully breaking down and analyzing all the combat scenes in a way that would easily be understood during filming. We wanted the crew on set to have an idea of what we actually want, and to execute it properly, and, thankfully, they did.

Omo Ghetto: The Saga’s ₦468 million at a box office record. How do you feel about its success?

I was elated. We were all naturally thrilled about it. The idea wasn’t to write a movie that would shatter records and become the highest-grossing Nollywood film of all time. The idea was to tell a good, relatable story, and hopefully record some success. We knew it would be a hit but we weren’t looking at shattering a five-year-old record. The movie exceeded expectations and it is very beautiful to see.

Your previous work includes Jenifa’s Diary and My Siblings and I, both comedy shows replete with the humour around Nigerian middle-class shenanigans. How did you get into scriptwriting? What is your approach to comedy?

I have always loved writing, even as a child, but I thought I would be a novelist. The journey to scriptwriting started when I got a friend request from someone on Facebook. This person went through some of the stories on my wall and found them entertaining. He asked if I’d ever written scripts and invited me to his office.

I spent the next few days getting accustomed to screenwriting apps. Being a storyteller, it wasn’t very difficult to convert my stories to scripts. When I showed up at the office the next week, I did well enough to get the job. That kick-started my screenwriting career.

I’d always written comedy even before I started writing scripts. I had a Facebook page where I wrote short humour stories. All I had to do was transfer the effort into scripts, so my comedy just changed formats.

Nollywood has a storytelling problem: disconnected storylines, inconclusive plots, shallow characters, overwritten themes. Why is that? What can be done to change this?

I think screenwriters are not given enough creative freedom to tell their stories. I have colleagues who struggle with interference from influential clients. It ends up looking like a battle for supremacy of opinions, and, at the end of the day, the writer is forced to cave in, because he who pays the piper dictates the tune, of course. When these movies come out, they end up looking mediocre because they have been altered by opinions from people who are not professional writers. I think writers should be trusted and given creative freedom while they work. Apart from this, I also think a more conducive and creative platform should be created for writers. This would help improve the quality of stories we have in our movies.

Aside creative freedom, what are other challenges for Nollywood screenwriters?

A lot of screenwriters cite remuneration as a big challenge, because writers are not as regarded and well-renumerated as they should be. Fortunately for me, I can’t relate to that. My personal challenges as a writer have mostly been economical. The environment does not seem to support creativity especially when you live in Lagos. You go out and spend hours enroute to the job. You return and you’re too exhausted to do anything else. You go to bed and, before you know it, it’s a new day and you have to go out again. It’s the same hectic process as an adult living here, and this hampers creativity.

What would you tell new screenwriters hoping to get a break in the industry?

CORRECTION, 5:30 PM WAT: An earlier version of this piece suggested that Omo Ghetto: The Saga‘s total gross is ₦468 million. That figure was only what it took to break the record in 2021. Its total gross now stands at ₦636.1 million.

Paula Willie-Okafor contributed to this interview.