“Love is a good point for telling stories because it brings out all the other emotions of pain, happiness, joy, euphoria, and sadness,” she said of the warmly received Ndani TV web series. “And it’s what our audience—a lot of them—want in their lives.” 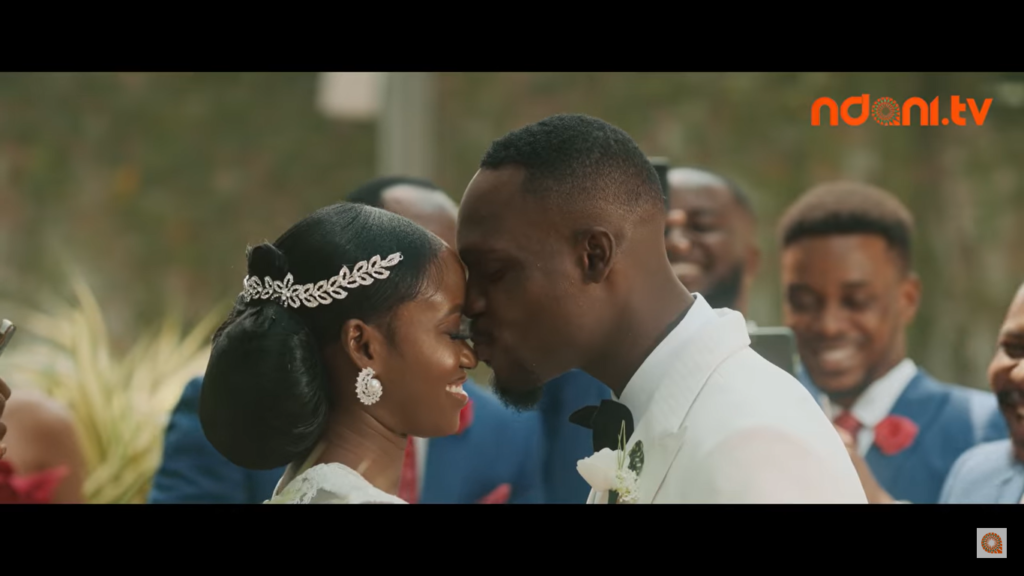 In the first episode of the Nigerian romantic drama web series Love Like This, a woman hooks up with her ex, on the eve of her wedding, and abandons her husband-to-be at the altar. But that is only a taste of what is to come. Directed by Adeola Osunkojo, the 12-episode series eases into the lives of its characters and interrogates their attachments, romantic and non-romantic. Produced by Ndani TV, whose shows include the hit series Skinny Girl in Transit, Love Like This has a cast of relatively new faces, led by Africa Movie Academy Award nominee Nonso Bassey (La Femme Anjola), and including Chisom Agoawuike, Eva Ibiam, and Okey Jude.

Osunkojo, a holder of Creative Arts degrees from the University of Lagos and an adjunct lecturer at Pan-Atlantic University, is known for her work as director of films, including Charmed and The Date, but especially of TV series, including Rumour Has It, Tales of Eve: Girls Only, Encounters, Life of a Nigerian Couple, and Awkward Things About Losing Weight, the last two of which she wrote. She was content director on MTN’s Project Fame West Africa, for seven seasons. In 2016, she won The Future Awards Africa & EbonyLife Prize For Screen Producer. This year, she worked as a producer on Elesin Oba: The King’s Horseman, the late Biyi Bandele’s adaptation of Nobel laureate Wole Soyinka’s 1975 play Death and the King’s Horseman.

Osunkojo speaks to Open Country Mag about Love Like This and her career as a filmmaker.

What drew you to the storylines of Love Like This?

I had worked with Ndani on Rumour Has It (Season 1), so it was just good to continue the relationship with Love Like This. And, also, the story caught me. It’s just interesting to see how different situationships and relationships play out in the lives of the characters. I love storytelling and any chance I get to work on a project, I take it if it’s within my time, and also it’s something I believe in.

I love that the characters are complex and deeply realized, and either follow the dictates of their heart or ignore them—and with consequences. How do you work with actors to bring their roles to life?

Someone once said that 90 percent of directing is casting—finding the appropriate talents to bring life to characters written in the script—and, I think, to a large extent, we were able to do that working with this set of actors: Okey Jude, Chisom Agoawuike, Eva Ibiam, and a lot of the other actors, including Jennifer Eliogu, who, of course, is a veteran in the industry. It was really nice working with every single one of them. They were also very passionate about their characters.

Really, as a director, what you do is guide; you don’t do the acting for them, you guide them towards it, and it was great to work with actors who were open to direction and also contributed to ensure that their characters came to life.

Were there any difficulties in directing the production?

The challenges I faced are most likely challenges that most filmmakers face working in Nigeria, because Nigeria is a peculiar country, and, of course, the industry is peculiar because it is a rising star. There is the issue of logistics, of getting the right sets to work in, the location to work in. We shoot in Lagos, so having to deal with the noise is another.

I think that every filmmaker, from Bollywood to Hollywood, also faces the challenge of working within the allocated time and budget. You always want to do more, and, sometimes, more means more time, and, other times, more means more capital. So it’s just trying to make sure that you are able to prioritize in the course of directing the production.

For me, what is most important is to tell the story as convincingly as possible, to be true to the scenes, and we are always proud of that. We did it with what we had available.

Many of your projects are, like Love Like This, centered on love. How do you approach love as a recurring subject?

I don’t set out to do love stories; love stories just happen to land on my lap. And that is a reality for anyone who works in the film industry, that love is going to be a constant thematic thrust. And that’s probably because love is one of the strongest emotions in the world, and a lot of human decisions are driven by it or the lack of it.

Thinking about it, a lot of stories are pretty much love stories, and they don’t have to be conjugal love. They can also be love for country, love for a particular point of view and fighting towards it, love for faith and belief. Whether we like it or not, all of the stories that we have are based on love. If I have a story of war, I’d still like to look at it from the lens of love, because that’s what drives human behavior. If we really do a script analysis and psychoanalysis, which we do for characterization, you’d find that the nucleus, the spine, the center reason for choices is love or lack of it.

But, you know, love is also a good point for telling stories because it brings out all the other emotions of pain, happiness, joy, euphoria, sadness. And it’s what our audience—a lot of them—want in their lives.

In a conversation on Love Like This, you shared stylistic choices employed in the series—like the use of mirrors, and light from a lamp forming a halo above Nimi’s head. Tell us more about this.

Filmmaking is an audiovisual medium. In production, I’m constantly asked, “What do you want?” I always tell people to ask, “What does the script want?” And that is the celebrity, the center of attention in any production: the story. And so because the story is important to us, we give it everything that it requires.

In Love Like This, we had characters like Teni and Abiye look in the mirror, and every time they do, they see a reflection of their inner selves. It is usually at a point where the characters are forced to examine their choices and see if they can live with themselves. So self-examination is the reason why we use mirrors.

Another thing that we also did was slow-motion effects. There are moments in my life that I have put in 60 FPS (frames per second) in my head, because I always go back to relive them. As the huge thematic thrust of the series is love, there are a lot of times when the characters are with others they really like, and what happens is that, at that point in time, they are their center of focus, and everything they do is a little exaggerated. I use slow motion when the characters are either intimate or see each other.

And then the lamp in Nimi’s sitting room. He is the man dumped at the altar, he sits down with the lamp behind him and it gives him that halo effect, to say, “Look. I’m innocent. I’m just a victim in the hands of Abiye.” And the moment he hurts Tamara, she moves where the halo is, because at that point in time she is now his victim.

So you have those kinds of things we did, such as using negative space, which is removing the looking room from the actor and placing it behind them. It shows that the character is not open to conversation.

I generally like to work with space because I feel like every relationship has a spatial implication. And the more proximity and intimacy there is, the more we know the relationship is in order.

The series ended on a cliffhanger. Are plans for a second season in place and what should we expect?

There are plans for a second season, and I am sure that Ndani TV will announce it as soon as they are ready to do it. Everybody wants to see the outcome of that cliffhanger.

What are you currently working on?

A couple of drama series, a movie, a reality TV show, and a documentary. The documentary is Ibrahim Attahiru: The Soldier’s Soldier, which is based on the former Chief of Army Staff Ibrahim Attahiru, who was a major force fighting insurgence in the northeast but died in a plane crash while on active duty.

What would you tell new filmmakers working to enter Nollywood?

Number 1: open yourself to as many experiences in life as possible. Trust me, it would widen your horizon and that would reflect in the body of work that you put out. You need to watch films from the greats—Akira Kurosawa, Alfred Hitchcock, Wes Anderson, Spike Lee. Look for their films, analyze them. Read books on films. Read books on other things: psychology, politics.

The best way to make a film, sometimes, is to actually make it. You don’t need to wait for the big opportunities. Start with your phone. Your phone is the single most powerful thing; people have made whole films with phones. Start small. Sometimes, the big opportunities don’t come first, sometimes it’s the little ones. Sometimes, it’s a handful working in the industry; it’s time-taking and can just feel like you’re not getting anywhere. Don’t give up.

You must also learn leadership, because, as a filmmaker, you are a creative leader, and you are leading people towards your vision. You must learn to communicate with people. And the first person you lead is yourself, so you have to learn discipline as well. You must further learn the art of negotiation. You are not just negotiating pay but also how you’d like to work. Filmmaking is an interesting journey, it has its dark moments and twists and turns, but it is a beautiful journey. ♦