The opening event at the Theater der Welt Festival in Germany saw the cultural icon and the European leader share experiences on race, fashion, and difference. 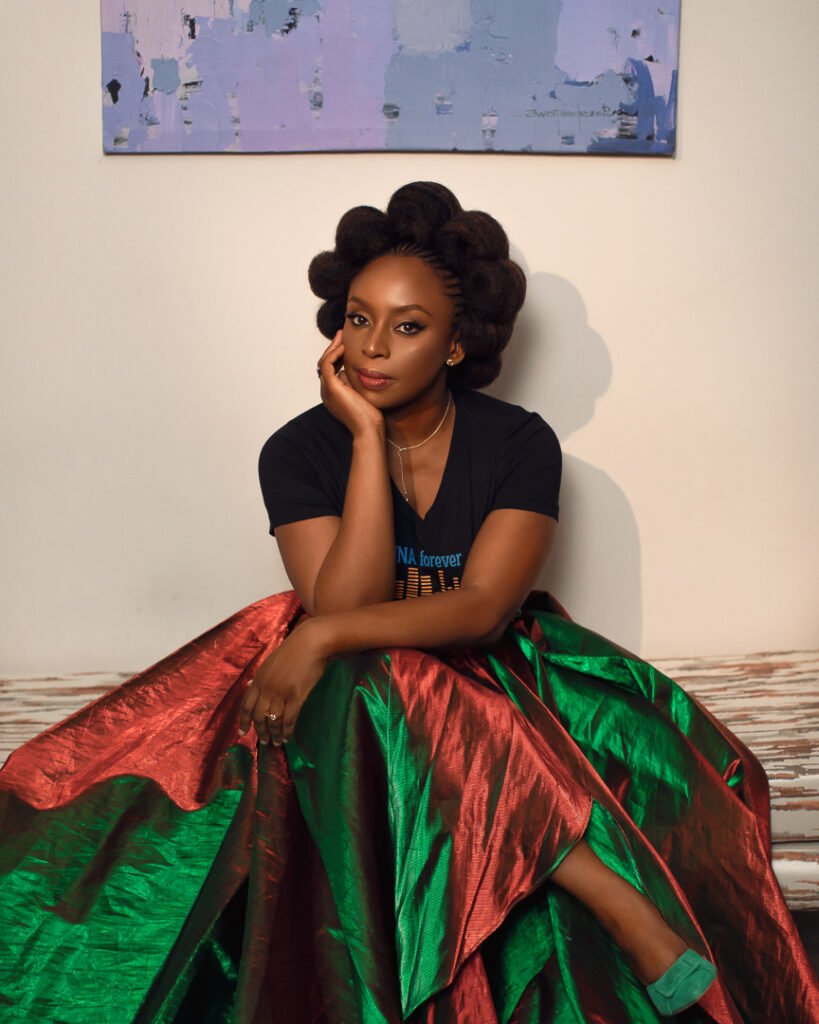 Chimamanda Ngozi Adichie opened Germany’s Theater der Welt Festival with the country’s Chancellor Angela Merkel. The event, planned for 2020 and postponed due to the pandemic, saw the cultural icon and the European leader, widely considered the most respected political leader in the world, share their hopes for a changing world.

They were interviewed in both German and English by the journalists Miriam Meckel and Léa Steinacker. The conversation, held at the Düsseldorfer Schauspielhaus, Düsseldorf, and in partnership with ada Learning GmbH, streamed live on YouTube this evening, at 4 pm Nigerian time.

Adichie’s most recent book, Notes on Grief, is also published today in Germany.

Here is a description of the event:

“Stories matter. Many stories matter”: with these words the Nigerian author Chimamanda Ngozi Adichie ended her highly acclaimed TED speech “The Danger of a Single Story” in 2009. In it she found vivid examples of how stereotypes shape our thinking: how, as a Nigerian, she first had to develop a differentiated picture of Africa, because in literature and media she was always socialized with a one-sided, western view of her own continent.

Stereotypes, she said, are not untrue, but they are incomplete. They ensure that one story becomes the only story and thus rob people of their dignity.

Chancellor Angela Chancellor Merkel has always emphasized the importance of different perspectives, especially because of her personal connection to the history of the GDR. Her insights into the stories about reunified Germany and the risk of one-sided views on important issues such as migration or political diversity determine her political action.

In her much-quoted Commencement Speech in Harvard 2019, Chancellor Merkel said: “I have learned that answers can be found even for difficult questions if we always see the world through the eyes of the other.”

The first question went to Chancellor Merkel, who will end her Chancellorship of Germany after 16 years—since 2005. Adichie expressed concern about her stepping down but maintained hope for Western politics. She spoke about the need for “an informed electorate,” as a way to combat European and American populism—a word she expressed concerns about.

“I’m not sure we have a democracy in Nigeria,” she said. “We have a government that’s been really illiberal about the freedom of journalism. I would call it an ostensible democracy.”

She added that political parties in Nigeria have no ideological basis. “In Nigeria, the parties are kind of platforms for patronage,” she said, but pointed out that the ideological divide in the U.S. has become too extreme. She explained why, in the U.S., she reads both The Washington Post and The Wall Street Journal, to “know what the other side thinks.”

Asked about her viral piece, “It Is Obscene,” as a criticism of social media sanctimony, she stood by it. “There is a lot of moralizing,” she said. “And it seems to be more common with the political left, my tribe.” But she pointed out that there is good on social media, referencing the End SARS movement in Nigeria.

On the refugee crisis, Adichie said, “I think that Europe has a moral responsibility to other parts of the world, especially those parts that Europe meddled in. Human beings are deserving of dignity because they are human beings. I felt that she [Chancellor Merkel] stood on those principles and I admired that, especially as there were political consequences for her. That’s courage and I admire courage.”

“This is what I like about Ms. Adichie’s approach,” Chancellor Merkel said. “She points to the fact that we are not one-dimensional.”

The conversation shifted to feminism. “I don’t think there’s a place in the world where we have full equality,” Adichie said. “Asking for equality is not the same as denying that men and women are different.”

She talked about how remarkable it is that four women are on the stage, and said, “I want a world where it’s ordinary, where it’s no longer remarkable.” Chancellor Merkel said, “Twenty years ago, I wouldn’t have noticed if the stage had only men. But now I do.” Later, talking about her relationship to the word “feminism” in response to a question that mentioned Adichie’s Beyonce feature, Chancellor Merkel said, “I can say that we should all be feminists.”

In response to an answer by Chancellor Merkel, Adichie said, “I want a world where male politicians will be asked this question and will answer as she has answered.”

They asked Adichie about her “fashion nationalism,” her promotion of Nigerian fashion using her international platform, and she joked, “I hear Dusseldorf is the fashion capital of Germany,” to the elated confirmation of the interviewer. She ended her answer by saying, “Nigerians, we just really—we have it.” Asked about her dress, a red and silvery patterned gown with one sleeve, she talked about making it from cloth belonging to her mother, Grace Ifeoma Adichie, who passed on this year, and who admired the Chancellor. Merkel on her part talked about the death of her own mother.

They talked about Adichie’s “The Danger of a Single Story” TEDx Talk. “I think of myself as a student of life, for life,” Adichie said. “I am a very keen supporter of asking questions. I don’t mind being asked whatever about Nigeria, but it’s about the how.”

“I often feel prickly when my African identity is brought up when it is not necessary,” she said, and went on to say she didn’t like her novels being read as anthropology and not literature. She pushed back against the idea of Africa as “a place that commands your pity but never your respect.”

In an interesting turn, Adichie asked Merkel about Nigerian President Muhammadu Buhari’s government’s claim of a contract with Siemens to increase electricity in Nigeria. The Chancellor proceeded to explain German involvements in other countries. “I will get back to you,” Chancellor Merkel said, “you will get your answer.” Later, Adichie said, “Please come to Lagos.”

“If you will receive me, I will come,” Merkel said.

When Adichie, in passing, said she is fascinated by Germany, for good and bad reasons, one of the interviewers asks her to give examples. She questions the lack of a German word for “race,” saying that race needed to be a conversation in Germany because it is something that affects Black Germans. Merkel spoke about the loaded history of the word—from the Nazi era—and said, “We will continue to discuss this when I come to Lagos.”

Asked if the world would be a better place if we read more, Adichie said, “Yes.” Then: “We need more empathy in the world.”

A recorded version of the conversation will appear online from September 13, in English, German, and the original version.