The revered Kenyan, who writes in Gikuyu, is also the prize’s first nominee as both author and translator of the same book. 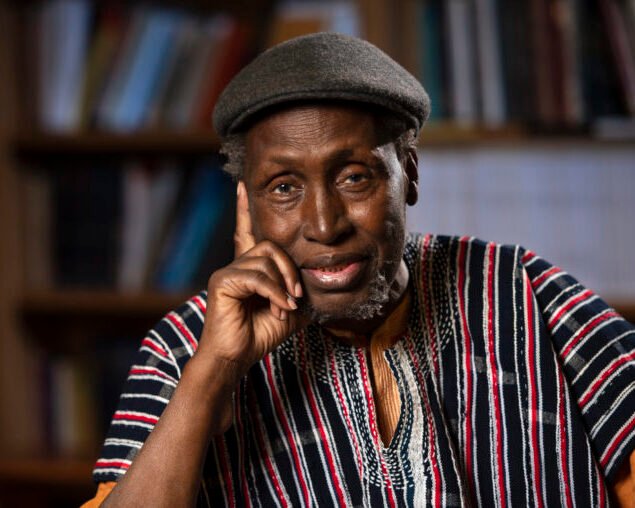 Ngugi wa Thiong’o has made International Booker Prize history. The revered Kenyan author’s novel, The Perfect Nine: The Epic of Gikuyu and Mumbi, is the first nominated book written in an indigenous African language—in his native Gikuyu. He is also nominated as both the writer and translator of the same book, becoming the first person to achieve the feat.

The International Booker Prize recognizes the best translated fiction. The author of the winning book claims £50,000, to be split with the translator of the book. Ngugi, 83, is one of 13 authors nominated. The Perfect Nine, a novel-in-verse, was described by judges as “a magisterial and poetic tale about women’s place in a society of gods.” It is his 34th book.

Here is a synopsis from its publisher, Penguin UK imprint Harvill Secker:

Gikuyu and Mumbi settled on the peaceful and bounteous foot of Mount Kenya after fleeing war and hunger. When ninety-nine suitors arrive on their land, seeking to marry their famously beautiful daughters, called The Perfect Nine, the parents ask their daughters to choose for themselves, but to choose wisely.

First the young women must embark on a treacherous quest with the suitors, to find a magical cure for their youngest sister, Warigia, who cannot walk. As they journey up the mountain, the number of suitors diminishes and the sisters put their sharp minds and bold hearts to the test, conquering fear, doubt, hunger and many menacing ogres, as they attempt to return home. But it is perhaps Warigia’s unexpected adventure that will be most challenging of all.

Blending folklore, mythology and allegory, Ngugi wa Thiong’o chronicles the adventures of Gikuyu and Mumbi, and how their brave daughters became the matriarchs of the Gikuyu clans, in stunning verse, with all the epic elements of danger, humour and suspense.

Until his imprisonment in the ‘70s by the Kenyan government, which also banned his books, Ngugi wa Thiong’o wrote in English as James Ngugi. In prison, “[he] began to think in a more systematic way about language,” he told The Guardian in 2006. “Why was I not detained before, when I wrote in English? It was there that I made my decision. I don’t know if I’d have broken through the psychological block if not forced by history.”

In 1980, Ngugi published Devil on the Cross (originally titled Caitaani mũtharaba-Inĩ), the first Gikuyu novel. Since then, the Decolonizing the Mind author has written his books first in Gikuyu and then translated them into English.

This year’s International Booker Prize longlist spans 11 languages and 12 countries. Lucy Hughes-Hallett, the chair of the judges, said of the 125 books submitted: “Authors cross borders, and so do books, refusing to stay put in rigidly separated categories. We’ve read books that were like biographies, like myths, like essays, like meditations, like works of history—each one transformed into a work of fiction by the creative energy of the author’s imagination.”

Hughes-Hallett is joined on the judging panel by journalist Aida Edemariam, novelist Neel Mukherjee, historian Olivette Otele, and poet George Szirtes. The six-book shortlist will be announced on 22 April, and the winner on 2 June.

BUY The Perfect Nine: The Epic of Gikuyu and Mumbi.