My mother was six months dead when I opened the trunk I found under her bed. I opened the trunk on the same day her headstone was laid. Rose, my daughter, accompanied me to the cemetery. I wore black, like it was a second funeral. Grass had grown over her grave, the earth erasing all memory of disturbance. The headstone was marble, paid for by my mother’s funeral insurance. Rose chose the gold lettered inscription.

Remember me when I am gone away,

Gone far away into the silent land.

The Rossetti quote was a touch melancholic, but so was my mother and, for that matter, so was Rose. We laid flowers, fresh white chrysanthemums. Rose said a few words, addressing my mother as if she were present. When she finished, she turned to me. I shook my head. The practice felt too foreign and fanciful.

Afterwards, we had lunch near Rose’s office, in what my mother would have called a smart restaurant, a maître d’ by the door, thick cloth napkins on the tables. Rose went back to work, and I returned home to retrieve my mother’s trunk from the store cupboard. The day’s ritual had left me wanting to touch something that belonged to her.

The trunk looked old. Brass fastenings and studs. Rose would have called it vintage. I avoided it for a long time. I had not enjoyed my previous experience of sorting through my mother’s things. There had been no catharsis, only a strange fatigue after holding the clothes she had worn and the books she had read. It became clear I did not know her very well. Madame Bovary was on her bedside table. In the recesses of a wardrobe, I found a pair of sequinned gloves.

The trunk fastenings were stiff and took some force to spring open. I lifted the lid and took out what appeared to be a scrapbook. There was a copy of my birth certificate stuck to the first page; on the next, a photograph of me by the seaside. My skin was as brown as the sand. There was a clump of my hair glued in place. My mother had written under the cutting: From little Anna’s head. She cries when I brush it.

The book was a sort of monument to my childhood, a small shrine of memories. In a picture from my confirmation aged thirteen, I wore a puff- sleeved dress. Plaits sprouted from my head like twigs and ribbons streamed from their ends, prayers knotted to branches. She had kept my letters from university, a swatch of red fabric and a white rose, pressed yellow with age.

There were some loose pictures of my mother and her sister when they were girls. Aunt Caryl was tall, almost scrawny, with her red hair disguised by sepia. My mother was smaller and sleeker with shiny black curls. My mother looked like a Bain, dark hair and blue eyes, a winning combination that obscured the plainer family features of thin lips and a weak chin. Aunt Caryl was an alien, or adopted, or ask the milkman.

In the months I avoided the trunk, it occurred to me that information about my father might be inside. I was very curious about him in my childhood. I knew his name, Francis Aggrey. I knew that he had arrived in England in the late sixties to go to university. I knew he had lodged in the spare attic room of my grandfather’s house, and that he and my mother had some sort of affair. When he returned to his country Bamana, she didn’t know she was pregnant with me. They never saw each other again.

‘I couldn’t afford it,’ she would say. ‘We can barely afford to go to Blackpool.’

Her answers never changed. There was nothing more to tell. I didn’t even know what he looked like.

By the time I was eighteen, I’d stopped trying to find out about him. Although, once in a while, I would daydream about travelling to Bamana, stopping strangers in the street and asking if they knew a Francis Aggrey. I don’t remember when that dream died.

I’d gone through all the photographs. The box looked empty. I shook it and heard sliding, objects rubbing against each other. I turned the trunk upside down and banged it. A false cardboard bottom came loose. Two notebooks fell out along with a black- and- white photograph the size of a playing card.

The man in the picture was the darkest tint in the human spectrum. Clean-shaven, smooth-skinned, almost oiled. I had his jaw, that straight square jaw that no other Bain had. His suit was pale, either grey or light blue. A metal pin held his tie in place, a small silk square bloomed from his breast pocket. His hair was cropped close, freshly clipped, shining with hair oil. I turned the picture over. To my white rose, with love, F.K.A., 1969. The ink was faded, the letters cramped to fit into the small space, except his initials, which took up half the inscription. It could be my father. Francis K. Aggrey. What did the K stand for?

I opened the first notebook, cheaply bound and filled with the same tight script.

London is afraid of me. Black man cannibal. Black man rapist. Hide your fat wives and your dumpy virgin daughters. Shut your door in my face. Look out. Tollund Man is coming.

The author’s voice was strong and alive, as if he had walked into the room and begun speaking. An intelligent black man, angry, humorous. Surely not my father, hidden away in this box by a woman who told me there was little to know but his name.

I do not know how to write in a book like this. I am not used to talking to myself, but where else will I keep my confidences? A student drowned himself last week. Ghanaian boy with mother and family back home in Accra, and he threw himself off a bridge because someone called him a nigger. One time is nothing. Nigger, coon, darkie—you hear it like a mosquito flying past your ear. But a year of travelling in a crowded bus with an empty seat next to you, of old landladies opening their doors and quivering at the sight of you, ‘Francis Aggrey? I thought you were a Scotsman’, ‘Francis Aggrey, I thought you were white’, and the bottom of the Thames might begin to look like home.

It was my father, Francis Aggrey, trapped between these pages for decades. I was suddenly cautious. What if this diary revealed something discreditable? Some crime he had committed, some fraudulent stain from which my mother thought it best to shield me.

I read on slowly. The next few entries were sketches of places I recognised. He was an accurate draughtsman. On a double leaf he had drawn the façade of the British Museum with the caption: I go to the Africa Section to sit in the warmth. Masks, stolen from my ancestors, surround me. These masks are made grotesque by their setting, the sacred turned ridiculous under the gaze of the uninitiated. The British public glance at me often, eyes darting from fertility goddesses to my black face. One of these days, I’ll climb into a glass case to oblige them.

I had enacted this scene several times in my youth. Young Anna walking into an affluent space, a jewellery store for example, or a gallery. Cue side glances tracking my movement, nervous and on edge. I tried to explain it to my mother once. ‘Don’t be so sensitive,’ she said.

There is something unseemly in running home to tell tales in these blank pages instead of speaking my mind like a man. Just on the corner today, I was running late for a lecture and I asked a man for the time. ‘Twenty minutes to noon,’ he said, before adding, ‘You talk nice for a nigger, don’t you?’ In Fanti, my response would have been out before he finished speaking. ‘You talk nice for a fool.’ But in English, this language I learned from missionaries, linguistically trained to turn the other cheek, all I could manage was, ‘I wish you good day, sir.’

Years from now, when I am back in the Diamond Coast, amongst my own people where I am most confident, to open these pages would be to release the sharp stink of unaired retorts.

I shut the diary. I did not want to meet my father in one sitting. I put the scrapbook and loose photos back in the box. I kept the books and Francis Aggrey’s photograph. I double-locked my front door and checked the kitchen window was shut. I left the stair lights on to show I was awake and lunging distance from a panic button. Next year, perhaps, I would sell the house and move to a flat with other families stacked like crates above and below me.

I went upstairs to my bedroom. I changed into my sexless pyjamas and turned off the lights. I still slept on one side of the bed, pinned to my half of the sheets, facing the space my husband once occupied. In the mornings, one side was always ruffled, the other smooth as an egg: portrait of a single woman’s bed. ♦

Sankofa is published in the U.K. by Virago Press.

—Biracial Britain: A Different Way of Looking at Race by Remi Adekoya

—The Fugitives by Jamal Mahjoub

The man in the picture was the darkest tint in the human spectrum. Clean-shaven, smooth-skinned, almost oiled. I had his jaw, that straight square jaw that no other Bain had.

I shut the diary. I did not want to meet my father in one sitting. I put the scrapbook and loose photos back in the box. I kept the books and Francis Aggrey’s photograph. 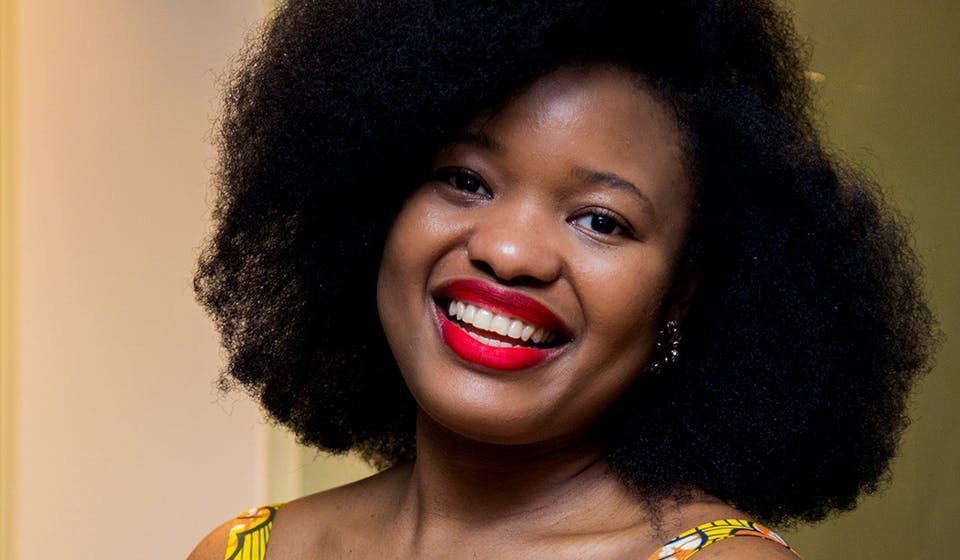 Chibundu Onuzo is the author of the novels The Spider King's Daughter (2012), Welcome to Lagos (2016), and Sankofa (2021). She has won a Betty Trask award and been shortlisted for the Dylan Thomas Prize and the Commonwealth Book Prize. She was selected for the Hay Festival's Africa39 list of 39 Sub-Saharan African writers aged under 40 with potential and talent to define future trends in African literature. She is a Fellow of the Royal Society of Literature’s “40 under 40” initiative. She has a BA in history from Kings College London and an MA in public policy from University College London. 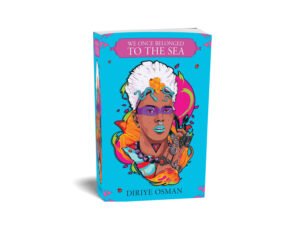 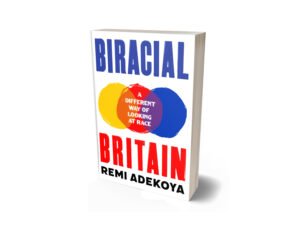