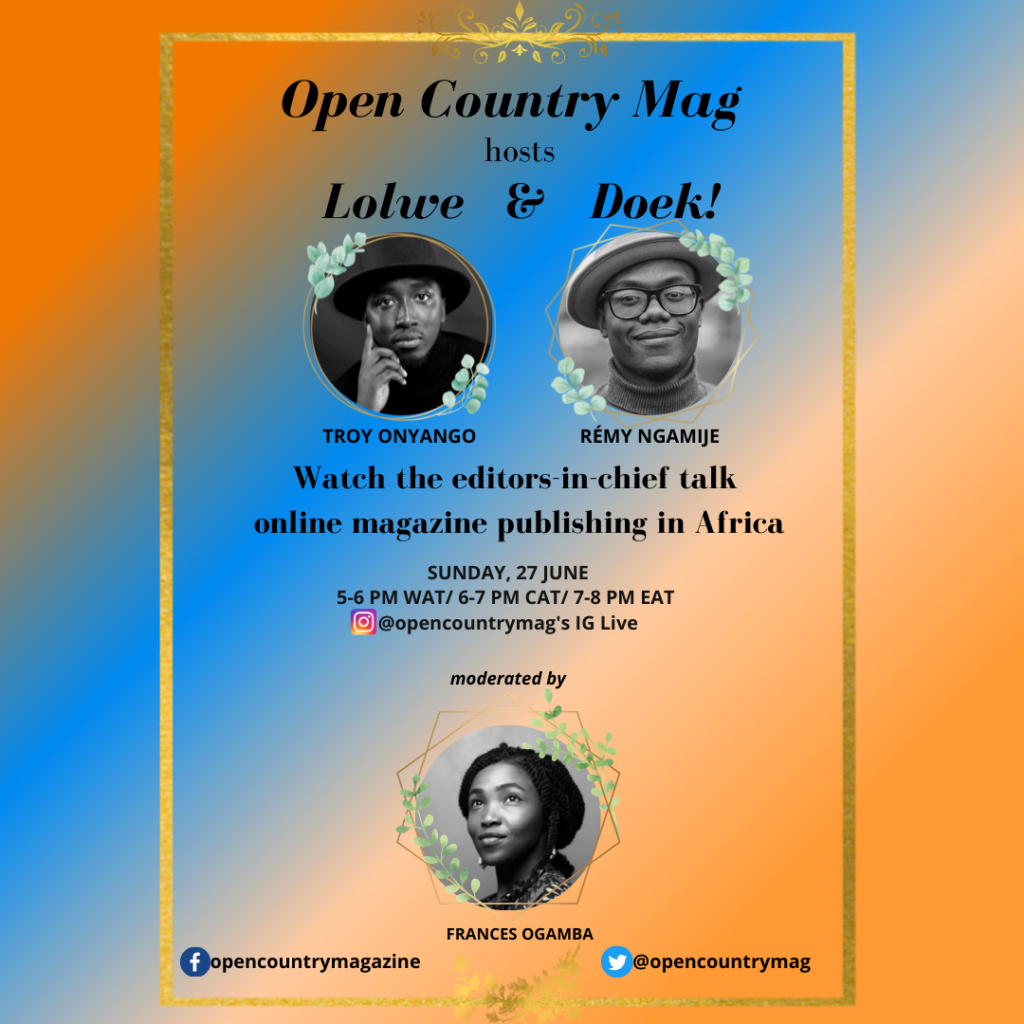 We are excited to announce that Open Country Mag will be hosting the Pan-African literary magazines Lolwe, based in Kenya, and Doek!, based in Namibia, in a conversation on the state of online publishing in the continent. The event, on our Instagram Live, will see the two magazines’ editors-in-chief, the award-winning writers Troy Onyango and Remy Ngamije, chat with the Nigerian writer Frances Ogamba. It is Open Country Mag’s first public event.

Earlier this month, Ngamije and Onyango were both shortlisted for the AKO Caine Prize. Significantly, Ngamije’s shortlisted story “The Giver of Nicknames” was published in Lolwe, and Onyango’s “This Little Light of Mine,” in Doek!. It is a storied shortlist that could be revitalizing for the prize itself, showing what needs to change.

Onyango rose to notability on the continental scene in 2016 as managing editor of the Enkare Review collective, and in 2020 he founded Lolwe, which released its Issue 3 yesterday. Ngamije and Mutaleni Nadimi co-founded Doek!, Namibia’s first literary magazine, in 2019.

“The biggest prize for me, as an editor, would be to find the means to sustainably continue discovering, nurturing, and publishing Namibian writers as Doek! continues its journey towards Pan-African publication,” Ngamije told Open Country Mag on his Caine Prize shortlisting. “It says African writers are here doing the hard work of writing and telling the stories that connect with readers.”

Onyango told OkayAfrica: “My story being in an African publication, and being accessible to anyone, validates the fact that the work is being done.”

Their conversation with Ogamba will trace their journeys as editors and curators, focusing on the vision that Lolwe and Doek! bring to the culture, reflecting the energy of a grossly underfunded scene. Both platforms are among several making the case that new Africa-based literary platforms have the cultural capital to revitalize the scene if enough faith and support are placed in them.

Troy Onyango is a writer and editor from Kisumu. He is the founder and editor-in-chief of Lolwe. His work has appeared in Prairie Schooner, Doek!, Wasafiri, Isele Magazine, Johannesburg Review of Books, AFREADA, Nairobi Noir, Caine Prize Anthology (Redemption Song & Other Stories), and Transition, among others.

The winner of the inaugural Nyanza Literary Festival Prize and first runner-up for the Black Letter Media Competition, he has been shortlisted for the Caine Prize, the Short Story Day Africa Prize, and the Brittle Paper Awards, and nominated for the Pushcart Prize. He has an MA in Creative Writing with distinction from the University of East Anglia, where he was a recipient of the Miles Morland Foundation Scholarship.

Rémy Ngamije is a Rwandan-born Namibian writer and photographer. He is the founder, chairperson, and artministrator of Doek, an independent arts organisation in Namibia supporting the literary arts. He is also the co-founder and editor-in-chief of Doek! Literary Magazine, Namibia’s first and only literary magazine. His debut novel, The Eternal Audience of One, is forthcoming from Scout Press (S&S). His work has appeared in AFREADA, The Johannesburg Review of Books, Brainwavez, American Chordata, New Contrast, Lolwe, and Granta, among others.

Frances Ogamba is the winner of the 2020 Inaugural Kalahari Short Story Competition and the 2019 Koffi Addo Prize for Creative Nonfiction. She is also a finalist for the 2019 Writivism Short Story Prize and the 2019 Brittle Paper Awards for short fiction. Her fiction has appeared or is forthcoming on Chestnut Review, CRAFT, The Dark Magazine, midnight & indigo, Jalada Africa, Cinnabar Moth, The /tƐmz/ Review, and elsewhere. She is an alumna of the Purple Hibiscus Creative Writing Workshop taught by ​​Chimamanda Adichie.

The conversation video will appear on our website and social media channels.