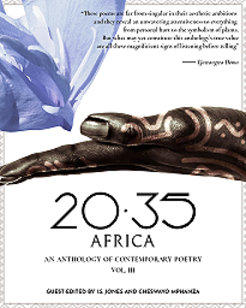 These poems hold some of the most visceral and philosophical stanzas you’ll read in any anthology, in any country.
★★★★★ 3/5
Home
Books
20.35 Africa Vol. III Review—The Pain Won’t Go Away

In the last four years, African poetry has shaped around honest excursions into the self and country. Much of this has taken place in the pages of the volumes of 20.35 Africa: An Anthology of Contemporary Poetry. Named for its contributors—all between the ages of 20 and 35—the series is edited by the Nigerian poets Ebenezer Agu, the founder, and Gbenga Adeoba, the Nigerian American poet I. S. Jones, and the South African poet Mapule Mohulatsi. The fluidity with which several parts of the latest volume, guest-edited by Jones and the Zambian poet Cheswayo Mphanza, segue into each other is quite the delight, and the poems hold some of the most visceral and philosophical stanzas you’ll read in any anthology, in any country.

Dalia Elhassan’s “conversations about home” begins with the line: “at the gathering I laugh and say I don’t believe in nationalism.” The poem is a powerfully packed statement, which perceptively turns and turns, line after line, holding a strong image of the poet within different storms, until the final lines:

i liberate myself in a dialect i’m still defending

even though the flag has failed me, i am still raising it.

The poignancy hammers home the reality of the modern African state, fighting decades after colonialism, bloodying border, ethnic, and religious lines. In Elhassan’s home nation of Sudan, the wars won’t go away; the Trado-Muslim conflict between the government and Sudan People’s Liberation Army (SPLA) resulted in tens of thousands of deaths, and, in 1989, Colonel Ahmad al-Bashir seized power. He was later declared by the US government’s Sudan Peace Act to have committed genocide against the country’s southern provinces. The Pulitzer Center reported two million deaths. You understand how the flag fails Elhassan.

At the peak of the End SARS protests in Nigeria, the flag metaphor assumed a painfully literal meaning when a protester holding the Nigerian flag was gunned down at Lekki Toll Gate, on live video. It was a joke in our faces: people had suggested that the Army cannot shoot at the Nigerian flag. We demanded action as we mourned our dead; later coped through a generational trauma by making jokes on social media about wanting to leave the country. For many, leaving is the Nigerian dream. Tiwaladeoluwa Adekunle’s “The Past Tense of Country” retains the idea, in clear and short lines. She:

swallows indignities with thanks

as the bloated belly of memories rise to the surface.

Ugochukwu Damian’s “if I die, what would my family write as my biography” demands peace after the depression that inevitably trails Nigerians. The closing punch wields so much clarity and pain:

if my fear succeeds, & maybe you find me in a pool or in the hands of men

burning with rage & bliss, set me on fire & please gather my ashes between the

pages of my favorite book. & in my next world, i promise, will come as a happy

It says, in these poems, that your country seeks your blood.

Ernest Ogunyemi’s “on miracles” peruses grief in stark and somber language: “The boy waits for a miracle. but the earth is heartless, it won’t spit out its dead.” To end the poem, Ogunyemi urges the boy (who could be any of us), in a way similar to Ugochukwu’s closer, to enjoy life irrespective: “dance with me, I say to the boy mourning what he cannot save.”

Adedayo Agarau’s “God’s Easiest Wrath Is Absence” reflects reactions to a father’s death, presenting the emotional turmoil of each family member. His title points a finger at God, accuses him of silence even as the poet finesses the court case, were it to be one: there’s so much pain and it doesn’t seem to be going away soon.

The following feels like the guiding light of this anthology: yes, there’s suffering everywhere and we’re all going through it, but we’re going to sing and dance. Music recurs and powerfully so.

Stanley Princewill McDaniels’ “Like Light Moving Across Oblivion” reaches a plausible conclusion, but it doesn’t really seem to be the end:

I have reached the point I, now, think I’m lucky enough

to get to, & should be grateful for, as in the gratitude of the rescued –

yes, I am the rescued; that point where, at last, blank as water,

I know when to stop trying, & agony is simply agony: raw, red; & being

lost is being nothing else, means no more, than being

Like “Oblivion,” every piece in this strong anthology urges you to think deeply of what the end means. By turning the timely and the ephemeral into an eternal conversation, the poets in 20.35 Africa’s Volume III have hit gold.