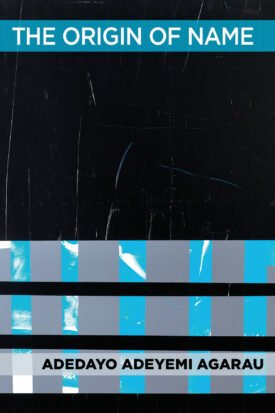 In his third chapbook, the Nigerian poet returns to grief. And he’s telling stories.
★★★★★ 2.5/5
Home
Books
The Origin of Name by Adedayo Agarau Review—Narrating Grief

Chief among the themes that Adedayo Agarau explores in his poetry—and his writing, generally—is grief. In his new chapbook, The Origin of Name, he treads that terrain again. Coming after For Boys Who Went, which was published by Words, Rhymes, and Rhythms in 2016, and The Arrival of Rain, published by Vegetarian Alcoholic Press in 2020, it is the poet’s most important work yet.

It was selected by Kwame Dawes and Chris Abani for the New-Generation African Poets: A Chapbook Box Set (SABA) series last year. Its preface is written by Mahtem Shiferraw, the Sillerman Prize-winning author of Fuchsia. And judging by the box set’s good readership, it is safe to say that The Origin of Name has reached more readers than either of his earlier works.

The Origin of Name is “filled with ancient knowing,” Shiferraw writes. Agarau’s strength, she suggests, lies in “the fact that his words carry with them a long line of ancestors, worlds within worlds.” She is not wrong: Adedayo Agarau is what the Yorùbá call akéwì: someone who sings wisdom, who chants profound lines.

An akéwì’s wisdom is fed by the wealth that is their forbears and what they have left behind. An akéwì is also—and this is his major duty—a storyteller. To do this, he has to have good knowledge and imagination. He alludes to the past, dreams the future enough for it to be palpable to the stranger that is the listener (in this case, the reader), and he sings the complex music of a particular moment.

The strongest poems in The Origin of Name are those in which Agarau tells stories. “An Analysis of Isolation” is good; in it, Agarau writes vividly about the Kiriji War (1877-1893). He does not do it like a historian. First, he captures the drama—a canon hitting a rock, a mother nursing her son in the unrest, mouths chanting feverishly, drums beating—and then he brings his lens closer (he is also a documentary photographer), for intimacy.

Another remarkable poem is “Orunmila,” which richly imagines the beginning of things. “The Naming of Things,” too, shows that conception, but mainly how much it can yield if the poet paid close attention to what he is trying to do.

“Abiku” is a striking poem, in the way it moves, line by line, without losing implication. In it—as in other poems in the book—Agarau explores Yoruba thoughts and perceptions in order to characterize his grief and the griefs of those connected to him:

Imagine this child as a god bending shadows in water.

Imagine it as room full of doors. . .

Imagine each closed door is a mother

crying her child back into her womb.

Agarau does not always arrive at a clear awareness—in “First Offering,” for instance, where he ends a series of declarations with “But my mother says that the gods are waiting by the door,” the poem reveals nothing—but he presents the complexity of his emotions and his visualisation well. In “Aubade for a Child with His Umbilical Cord Tied around His Neck,” he writes:

the gods stilled the room from the corner where she sat

a boy falls out of his mother carrying

a long line of fathers around his neck

To be born is to die (to “fall”; “bone,” “salt”), but also to be burdened with history. (The spacing in the poems is impressive; they are visual and allow him to jump from image to image without confusing the reader.)

Adedayo Agarau is an interesting poet, one that, to paraphrase Jean-Joseph Rabearivelo, knows how to clothe lepers in finery of flowers. And there are many flowers in this book.

But a little more clarity from him would have been beneficial. Some of the poems betray their own internal logic, such that the beautiful words do not cohere enough to do anything to the reader. In “First Offering,” again, there are several bright images, but what does the poet mean when he compares silence to “the void upon the sea/ on Sundays”? Why Sundays? Is there not a void upon the sea on other days? Just a little more clarity in this book and the magic would have hit home.