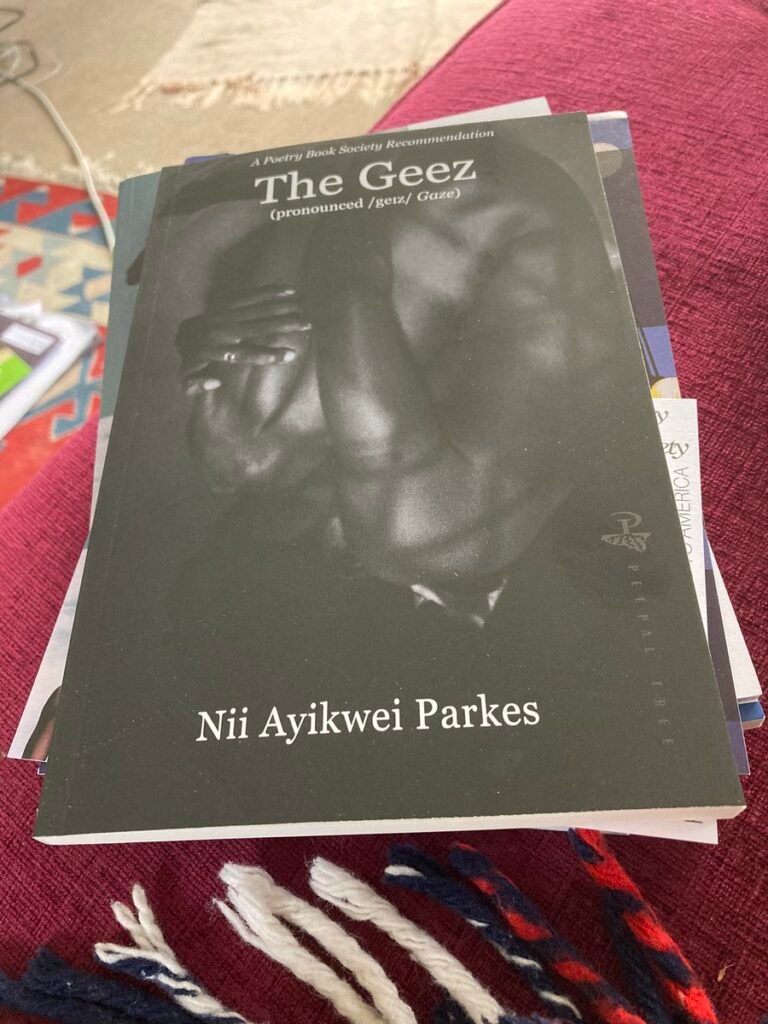 Inventing his own poetic device, the Gimbal, Parkes amplifies his strong imagery and perfect blend of humour and solemnity.
★★★★★ 2.5/5

the ball away from someone’s control to send it

It is in this way that the UK-born, Ghana-raised Parkes connects beauty and sorrow and, like a basketball player, dunks his words into the readers’ mind.

The Geez contains 42 poems partitioned into four sections: “Game,” “Eros,” “Eaux,” and “Zest.” The eleven poems in “Game” tackle the pros and cons of family life, grief, loss, and Blackness. Parkes hinges these poems on a multitude of references: football, basketball, mathematics, rap, and jazz. Another poem in this section, “Seeing Eyes,” tells of familial love that beats understanding: a blind grandmother who can recognize her grandchild just by sensing his presence:

I recall hiding from my grandma, her dark eyes imprisoned behind cataracts

I was always stunned how easily she found me.

The fourteen poems in “Eros” are concerned with matters of love, especially the romantic and sexual. The imagery here is clear, the words precise. Some of the poems have trauma lurking beneath their surfaces but Parkes lets the beauty of bodies coupling and uncoupling to shine through. “A Concise Geography of Heartbreak” veers off the course of the romantic into the political. In three parts, it narrates the arrival of European colonizers on African soil; it tells of how the colonizers “whisper in your ears/ nibble on your lobes/ sending a shiver running through you” and then fleece the people of their natural resources. But the people soon jerk out of their folly and reclaim their land: “even if the new country you carve is/ an assembly of broken things, it is yours.” The poem demands a different kind of love: self-love.

“Caress,” one of the poems in the third section, “Eaux,” is a narration in nine parts, of stories of lovers, of love-gone-sour, and son-mother battles.

It is easy to be misled when your head lies

in the lap of a lover who promises all

the things you want your life to be filled with, without

so much as a skipped heartbeat.

Of the eight poems in the fourth section, “ZEST,” “CROSSROAD VS BLUES (or You Wouldn’t Talk about Crossroads If You Knew My Life)” stands out. It begins with lyrics from the blues song “Crossroads,” by Robert Johnson. It travels back to the early 1900s and, through 12 personas, tells of the harsh realities that black Americans endured, their unshaken courage to push through and conquer. This is Stevie, one of the poem’s persona:

Had a mean old daddy, his hands rained pretty heavy

Parkes develops a device called the Gimbal. It is a style of four or five run-on lines and a succeeding single line. Parkes has said that it “conjures the workings of a gyroscope,” continually being on the move emotionally, figuring things out, and yet not stopping because time never stops. In “Of Serendipity,” Parkes refers to gyroscopes as “objects with a steady core.” Within the strengths of this collection—strong imagery, a perfect blend of humour and solemnity—the Gimbal shines.

In The Geez, Parkes succeeds in documenting personal pains and desires and the ills and beauty of the world.

The Geez is published by Peepal Tree Press.