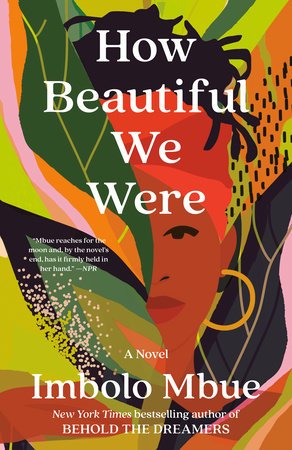 The Cameroonian’s second novel incorporates storytelling elements from the Old Testament, where the destinies of marginalized peoples are entrenched in the communal and the spiritual.
★★★★★ 3/5
Home
Books
How Beautiful We Were by Imbolo Mbue Review—Oil Politics in a Tussling Village

In the opening pages of How Beautiful We Were, the second novel from the Cameroonian author Imbolo Mbue, a meeting takes place in Kosawa, a fictional village. Pexton, an American company drilling oil in this village, has sent representatives to speak with the people whose environment suffers serious degradation. The water unclean, the air thick with fumes, people are dying, and, grimly, the most affected are the children, whose lungs tire out after much coughing.

As with previous meetings, the representatives promise to do something. This time, though, there is opposition—from a madman. Konga makes a promise of his own: the representatives aren’t leaving, he says, dangling their car key before them. His possession of the key (and what he has done to the driver) is a mystery. Persuasion become threats. A shared belief bars the villagers from touching a madman. Convinced that “the Spirit” is manifesting its will through Konga, the villagers take the men hostage, setting the story in action.

How Beautiful We Were is a very different book from Mbue’s first, Behold The Dreamers. For context, she began writing Beautiful in 2002, over 17 years before she penned its last words. In that time, the author moved from her Cameroonian hometown of Limbe to America, where she’s lived and studied since. While Dreamers is an immigrant novel set in 2008, Beautiful is less contemporary, beginning in 1980 and hinting at a period of relative innocence.

Structured within two broad perspectives, the novel is narrated by five members of the Nangi family and “the children,” a group of Kosawa kids born in the same year. The children’s third-person plural narration—“we”—takes up after the Nangis’, and the firstborn of the family, Thula, is centered.

Even though Thula narrates only a chapter, her trajectory continues in other chapters, bringing focus to her peculiarities: introversion, intelligence, and dangerous sadness. In her boisterous circle of friends, Thula’s silence screams. Its origin: Malabo, her beloved father, is missing and possibly dead. He’d led five other men to Bezam, the country’s capital, to seek answers for why their small village is suffering. As the children remark, Kosawa “had come to know the fullness of the curse that came from living on land beneath which oil sat.”

How Beautiful We Were evokes a similar atmosphere with epic narratives like Ngugi wa Thiong’o’s Wizard of the Crow. Shunning the panoramic for intimate shots, it traces a society’s journey through complex human relationships. There is the restrained affectation between brothers Malabo and Bongo, the unrelenting friendship between Yaya and daughter-in-law Sahel, the earth-shaking love shared by Thula and Austin, an American-born journalist who tells Kosawa’s story in an international newspaper.

This closely-knit community is shepherded by the twins Jakani and Sakani, arguably the novel’s most intriguing characters, arousing great interest in the children: “When we told these things to our friends and cousins in other villages, they refused to believe us—their villages had mediums and medicine men but no version of the twins—but we believed each other, for we knew that the twins were capable of deeds many deem impossible.” Their story is linked to Kosawa’s origin story.

Supernatural elements don’t solve the plot, though. There are tense scenes where the optimistic reader might think: Surely, the Spirit will fight back and bring some hope to these oppressed people. But spiritualism has little answers for capitalism.

Mbue shows little of that world, anyway. Although Bezam recurs in the story, she doesn’t depict the totalitarian President and his halls of power, spurning a chance to bring variance to the beleaguered tone of much of this book. The little dialogue throughout the book also hinders the believability of some characters, denying them original voices.

However, the female characters are markedly different. A central relationship is that between Sahel and her mother-in-law Yaya. Yaya presses Sahel to marry again: “When will it end for us women, this doing what we have to do for the sake of husbands alive, husbands dead—when will it end?” Aisha, a younger cousin of Sahel’s friend Cocody, tells a grandfather that “in the days to come the world will function the way women want it to.” In the winding end, and through a man’s story, Imbolo tears open an underexplored part of the gender wound, revealing the extent of toxic masculinity.

As Mbue discusses during the book’s launch, the novel incorporates storytelling elements from the Old Testament, where the destinies of marginalized peoples are entrenched in their communal strength, spiritual background, and sociopolitical leadership. Yet How Beautiful We Were doesn’t slither into rosy simplicity. At the height of tensions between the people of Kosawa and Pexton (aided by the government), the village learns that international support is mere formality.

In the novel’s latter parts, Thula, who has been studying in America, sends detailed letters home to her friends in Kosawa, opening their eyes to the universal problem of oppression. As hope thins into despair, the children, who are children no more, seek the assurance of guns. One consequential night, hiding the acquired machinery away in the bush, they feel alive. Where they once fled, they can now stand. The politics, the revolution, the death of innocence—all interlink here. “How glorious it felt to be powerful,” they enthuse.

Watch Video: Imbolo Mbue Launches How Beautiful We Were with Editor David Ebershoff