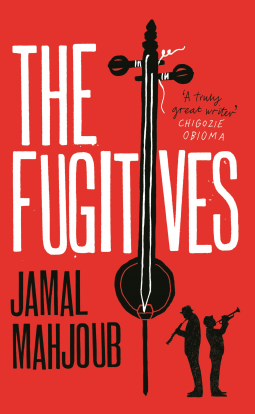 Even with its serious subject, the novel finds balance through sustained humor and is enhanced by Mahjoub’s ear for dialogue.
★★★★★ 2.5/5
Home
Books
The Fugitives by Jamal Mahjoub Review—Sudanese Music & Displacement

The Fugitives, the beautiful and daring novel by the Sudanese author Jamal Mahjoub, is a measured investigation of music and society. The story centers on the Kamanga Kings, a fictional Jazz band that thrived in Sudan before Omal Al-Bashir became Head of State through a bloody coup. Al-Bashir was overthrown in 2019, after 30 years as president.

Until his removal, Al-Bashir unleashed his “morality police” in the country—musicians were persecuted, many fled, people couldn’t dance freely, relationship between men and women and women’s freedom were sanctioned. It was an attack on cultural life, and it was fitting that women played a prominent role in deposing him. Mahjoub’s novel is set against this backdrop.

The narrator is Rushdy, a schoolteacher and musician. We meet him as a disillusioned young man trying to offer quality education to his students, most of whom aren’t reciprocating his zeal. “All they saw was a short-sighted man spouting nonsense that they could not put to any useful purpose,” and having to teach Charles Dickens’ David Copperfield and A Tale of Two Cities, even he “struggled to explain what the experience of a dead white man in nineteenth-century England had to offer a child growing up in Africa in the early twenty-first century.”

The narrative reveals itself to be about displacement, as Rushdy reels from the negative climate imposed by Al-Bashir. He transcends these disappointments in private, appreciating the musical legacy that his bohemian late father—a co-founder of the Kamanga Kings—left behind. In their honour, Rushdy learns to play the trumpet.

A letter arrives from Washington D.C., inviting the estranged band to a musical concert. A couple of the original Kings are onboard, and soon word gets out and musicians emerge from hiding, auditioning for spots in the reinstated band. It is a public event, and even the government, in a forced show of solidarity, suddenly wants to help the Kings conquer America.

Mahjoub introduces America to the Kamanga Kings through beautiful language and cinematic precision, portraying the quickly-learned quirks of unwelcome visitors. He’s particularly sharp in his descriptions of the weather, allowing the newness of experience to inspire wonder. Like most of the characters, America is fully alive on the page, a wholly strange land they must contend with. Rushdy expresses his distrust of the country: “[It was] like a language that made itself up as it went along, and it was a conversation that excluded us.”

The Fugitives is marketed as set “between Khartoum (the Sudanese capital) and the chaos of Donald Trump’s America,” and its critique of the U.S. Immigration and Customs Enforcement (ICE) stands out for its timeliness. When Hisham, a member of the band, reveals his plan to illegally stay back in America, he and Rushdy enter a bitter argument, opening old scars of war and redemption. They are the book’s central questions: What do we call home? Is it where one was born or the place where he or she feels most alive?

“We’re chasing a dream, a myth,” argues the band member, urging Rushdy that “we should be living in the present, thinking of now, and of the future, not tying ourselves to a dream our parents had. Independence, what did that ever bring us?”

Even with its serious subject, the novel finds balance through sustained humor, and is enhanced by Mahjoub’s ear for dialogue. His experience as a crime fiction writer, under the pseudonym Parker Bilal, shines during the road trip, as he blends conventions of the genre: a romantic relationship crystallizes from initial disdain; there’s a humorous character who has all the punchlines; an eccentric mystic and a melancholic character are in the band’s entourage. One of them, John Wau, is from the seceded country of South Sudan, and often bemoans the fractured history between his ethnic group and the others in the band. His character, however, lacks peculiarity, and his comments do not register with the intended emotion.

The Fugitives does not limit itself to commentary. Mahjoub situates the perspective and concerns of artists in a much larger conversation, sometimes through metaphor:

A nation is like a band waiting for a conductor to show up. Without a leader to guide them an orchestra is just a flock of lost sheep lacking direction. He was certainly right about the country. Our entire history was a list of men who claimed a divine right to lead us. Those who objected tended to fall by the wayside.

Since the 2000s, African immigrant experiences in America and Europe have been beautifully captured in novels like the Ethiopian Dinaw Mengestu’s The Beautiful Things That Heaven Bears, the Nigerians Chimamanda Ngozi Adichie’s Americanah and Chika Unigwe’s On Black Sister’s Street, the Zimbabwean NoViolet Bulawayo’s We Need New Names, and the Cameroonian Imbolo Mbue’s Behold the Dreamers. Sudanese novels have also sometimes moved across geographies. In Tayeb Salih’s Season of Migration to the North (1966), the character goes to Europe and, as Mahjoub wrote for The Guardian, “discovers the dark heart of his soul there.” In Veronique Olmi’s Bakhita (2000), a woman, based on the real-life Josephine Bakhita, progresses from enslavement to an Italian convent and, after death, is canonized as one of Africa’s first Catholic saints. The Fugitives flashes on connected emotional touchpoints, but goes further to offer a cultural perspective, placing classical African music side by side with America’s, highlighting the deep-rooted extent of our shared influences.

The book threads past and present, utilizing cultural figures. A striking anecdote is how, in the story, Louis Armstrong influenced the formation of the Kamanga Kings when he performed in Khartoum in 1961, a period when such cross-continental exchanges were frequent. While Highlife—patented from a fusion of Latin calypso, traditional Ghanaian music, and Jazz—dominated West Africa, the Sudanese moved from poetic, folk music to the Islam-inspired haqeeba in the 1920s, to the American pop influences of the ’60s and onwards, when musicians like Ibrahim Awad, Osman Alamu, and the politically conscious Mohammed Wardi gained popularity.

(Accompanying the novel’s release is a playlist, with songs from Fela Kuti’s Water No Get Enemy, William Onyeabor’s Atomic Bomb, Angelique Kidjo’s Born Under Punches, and El Bambi, a reissued record by Sharhabil Ahmed, the acclaimed “King of Sudanese Jazz.” Sharhabil is perhaps the closest to what the Kamanga Kings would sound like in reality.)

In the latter sections of The Fugitives, Rushdy acquires a typewriter, tasking himself with telling the story of the Kamanga Kings. If he doesn’t write it, no one else will, it seems. This is him reminiscing on the wondrous depth of the band’s journey:

There are moments, some of them recorded in history books, but many of them not, which remind us that miracles are possible. They are come and gone in the blinking of an eye. We snatch eternity from a brief encounter that allows us to rise together to the heavens, lifting our spirits, up into the deep, dark unfathomable night that sooner or later will cover us all. If that’s not the essence of music, I don’t know what is.

As a music journalist and writer interested in the contemporaneous application of cultural histories, few novels have satisfied me more.